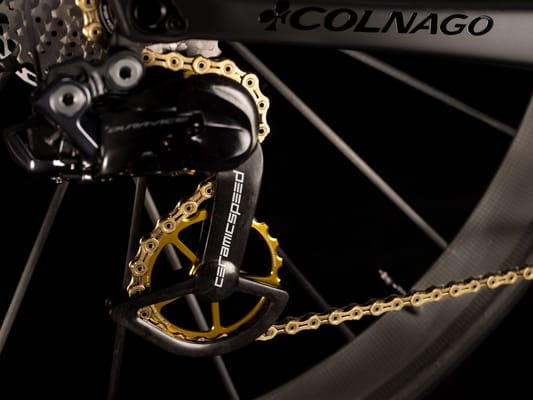 At the age of 13 Ernesto Colnago, in order to work at the Gloria bicycle factory in Milan as a welder, changed the date of birth on the documents.

1954 – The entrepreneurial story of Colnago is born in the small shop in Via Garibaldi 10 in Cambiago. To start the business money was needed, so it was necessary to make do. His father therefore cuts a mulberry owned to make the workbench.

1955 – During a ride he meets Fiorenzo Magni, who complains about a pain in his leg. Ernesto points out that the cranks are mounted badly, and fixing them solves the problem. In the same year he left for his first Giro d’Italia as a mechanical assistant in the team of the champion, who then won the pink jersey.

1956 – At Colnago came the idea of cold bending the fork tubes, to keep them more elastic, managing to achieve the desired results by leverage two pieces of wood fixed on the work table.

Observing pedaling the sixteen year old Gianni Motta understands that he will become a champion, and decides to provide him with bicycle and assistance. Motta, among the many successes under the leadership of Colnago, will win the Giro di Lombardia in 1964, will finish third at the Tour de France in ’65 and will triumph at the Giro d’Italia in ’66.

Colnago meets Eddy Merckx, who needs reliable and artfully recorded wheels to be used at Milan-Sanremo. The job is perfect and Merckx wins the race.

1972 – Ernesto has not been a simple mechanic for a long time: he is now a full-fledged constructor, and making Merckx’s bikes – even 20 in a year – is his definitive consecration. The masterpiece is the bike used by the Belgian champion for the hour record.

1974 – With the sponsorship of Scic by G.B. Baronchelli Colnago brings the ace of flowers to its official entry into the world of professional racing.

1980 – Colnago is a tireless technological innovator, but also an entrepreneur of great intuition. The technical and commercial collaboration with the Soviet Union brings a precious return of image, as well as important successes such as the Olympic victory in Moscow in the team time trial.

1982 – Ernesto Colnago joins the Del Tongo family’s project to create a global team, and in the same year Giuseppe Saronni wins the World Championship at Goodwood.

1986 – Investing on the future, on innovation and on quality. Never stop believing. Ferrari and Colnago have a lot in common, and not by chance develop a friendship that will lead to many revolutionary projects. The Drake, proposing to collaborate with Colnago, immediately clarifies: “I just want good things, at Ferrari’s height”.

1995 – The evening before the debut of a carbon bike – the C40 – to the grueling Paris-Roubaix, Colnago receives a call from Giorgio Squinzi, patron of the Mapei team: “… Ernesto, but are you sure that our riders will not have problems tomorrow? Does the frame do not risk breaking? And then that fork all straight … “.The C40 will triumph in this edition and in 4 more of the following 5.

The year of the return of the big brands of bicycles on the jerseys of the runners: a concrete help of the builders to a sport in crisis. Naturally, Colnago is also on the front line with the Colnago CSF team. “If we do not believe in what we do, how could others invest in cycling?”.

As for 60 years now, Ernesto enters his factory every morning and tirelessly takes care of every detail, gives birth to new ideas, looks beyond the borders. It makes plans for the future.